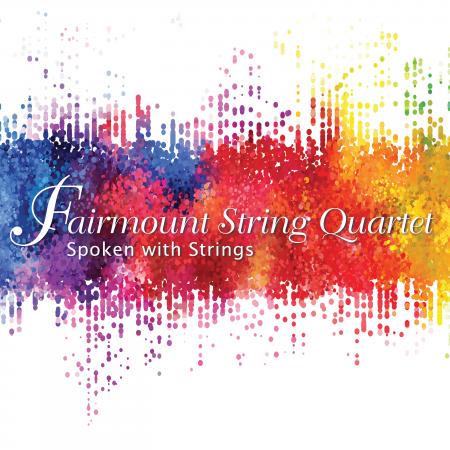 It’s hard to believe that Spoken with Strings is the debut release of Philadelphia-based Fairmount String Quartet.  The group has been active around the US since 1984, with extensive performances in the Philadelphia region.

Spoken with Strings comprises nine carefully chosen and artfully arranged selections from the contemporary pop canon as interpreted by the singular brilliance of players Rachel Segal (vn), Leah Kim (vn), Beth Dzwil (va)and Mimi Morris-Kim (vc).  The album exemplifies the versatility of music pitting pop music in a traditional string quartet setting.  A prime example is the group’s rendition of Outkast’s Hey Ya, maintaining the energy of the original, while also expanding on the elegance and romance of the song.

Spoken with Strings is a unique choice for a debut album from such classically trained and established performers, but the Fairmount String Quartet has never attempted to conform to only performing traditional repertoire.  Violinist Rachel Segal was featured in the DC Metro Theater Arts for her “bravura performance” of Mario Davidovsky’s Synchronism #9, and violist Beth Dzwil has recorded six critically acclaimed jazz albums with The Tyrone Brown String Sextet.

Music education has also been a key pillar for the Fairmount String Quartet, often collaborating with student instrumentalists, choirs and dancers.  With Spoken with Strings the group acknowledges the importance of popular music while retaining the performative nature of the traditional string quartet. This pairing provides a unique look into the harmonic language of these nine pop songs.

All Songs Recorded, Mixed and Mastered by Starkey